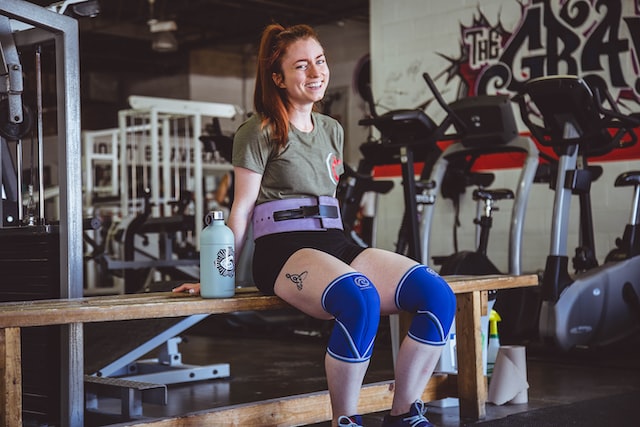 Exercise belt; what is the benefit? The conversation will focus on the training belt, which has become essential for almost all bodybuilding. The article will answer about the advantages or disadvantages of this accessory. Every athlete wants to achieve high results as soon as possible. A properly designed training program is engaged precisely in the growth of muscle tissue mass. Still, for this, it is not possible without severe physical exertion. Avoiding injury when lifting heavy weights is complex, and athletes should try to minimize this risk. One of the ways to prevent injuries is an exercise belt. This article will try to deal with the positive and negative aspects of using it. Finally, the results of research on this topic will be presented.

How an exercise belt works

Bodybuilders use a traditional weightlifting belt in the training process, a fastener that should protect the athlete’s health during strength training with large weights. The belt works very simply. When it is tightened in the abdomen, the athlete’s torso, primarily the spinal column and the vertebrae located on the lumbar spine, receive additional support and become resistant to possible deformation. Interestingly, the belt has been used by athletes for a long time, and it works! With his help, athletes managed to avoid a large number of injuries.

Advantages and disadvantages of training belts

With the pluses, everything is quite simple – the belt is the leading and only way to prevent injuries. He copes well enough with his task. The suppression of fear can also be attributed to the positive aspects because an athlete is a living person and, subconsciously, is afraid of injury. According to the athletes themselves, it is tough to force yourself to give your best in the classroom without a belt. The situation is entirely different when the belt is worn.

Among the disadvantages is increased body temperature. The belt is made of thick material, and the area of ​​the body underneath is deprived of breathing capacity. It can be a problem for some, especially in summer, when the ambient temperature is already high. However, the protection afforded to the athlete still outweighs this inconvenience.

It can also be pointed to addiction in a belt. You shouldn’t wear it all the time, but among the positive features of the belt, athletes often describe a reluctance to take it off. Of course, this is good and can indicate the high quality of the accessory. However, it is still necessary to remove the belt. The last point I want to draw your attention to is the possibility of muscle atrophy. The human body must try to maintain the weight itself. Of course, when working with large weights, this is an injury. Still, constantly working with a belt, some muscles can atrophy. After taking off the belt, the athlete cannot perform some exercises.

Athletes are rarely invited to conduct research, usually related to nutrition. In the case of the training belt, this did not happen. Several experienced athletes were selected for the experiment. The main criterion for selecting subjects, in addition to their experience, was the ability to perform a squat with a weight greater than 1.6 times the athlete’s body weight. Thus, the experiment involved athletes with a body weight of 100 kilograms which could go to the skin with at least 160 kilograms.

During the experiment, measurements were made at various moments during squatting: muscle activity, angle of inclination (to control execution technique), execution time, etc. First, the athletes squatted 8 times without using an exercise belt and then put it on.

The study revealed that the technical exercises were performed correctly, both with and without a belt. There was a slight increase in intra-abdominal pressure, ranging from 25 to 40 percent. The myth of reducing oblique muscle tension with belt training has also been dispelled.

Proponents of house jumping without a training belt believe that this way, you can work more on some muscles in the abdominal cavity. But this fact has not been proven experimentally. But it turned out that with a belt, athletes beat the “dead center” faster. In addition, an increase in the tension of the quadriceps at this moment and a high activity of the hamstrings were recorded. This fact speaks of more vigorous exercise in the work of the biceps and quadriceps. But in the work of the dorsal group’s muscles, noticed no changes.

According to the results of the experiment, we can say that it is still better to use an exercise belt. However, scientists made some reservations about the final verdict.

The trial was not designed to investigate the belt’s long-term performance. However, based on the results obtained, it is likely that there will be no improvement with prolonged use of the belt. However, as well as adverse effects.

It also noted that although there was no significant tension in the oblique abdominal muscle without using a belt, this could not indicate that other forces were not working more actively. Such a study has not been carried out.

Well, the last change in the test results refers to the fact that it is not known how athletes train consistently: to use a belt or not. Previously, it was established that athletes who actively use simulators accurately with their help achieve their goals. Conversely, athletes who prefer free weights show maximum improvement here.

I must admit that although this study was not comprehensive, its findings can only speak to the benefits of using an exercise belt. However, for a thorough investigation of the question of the benefits or dangers of using sports belts for athletes, it is necessary to continue research.