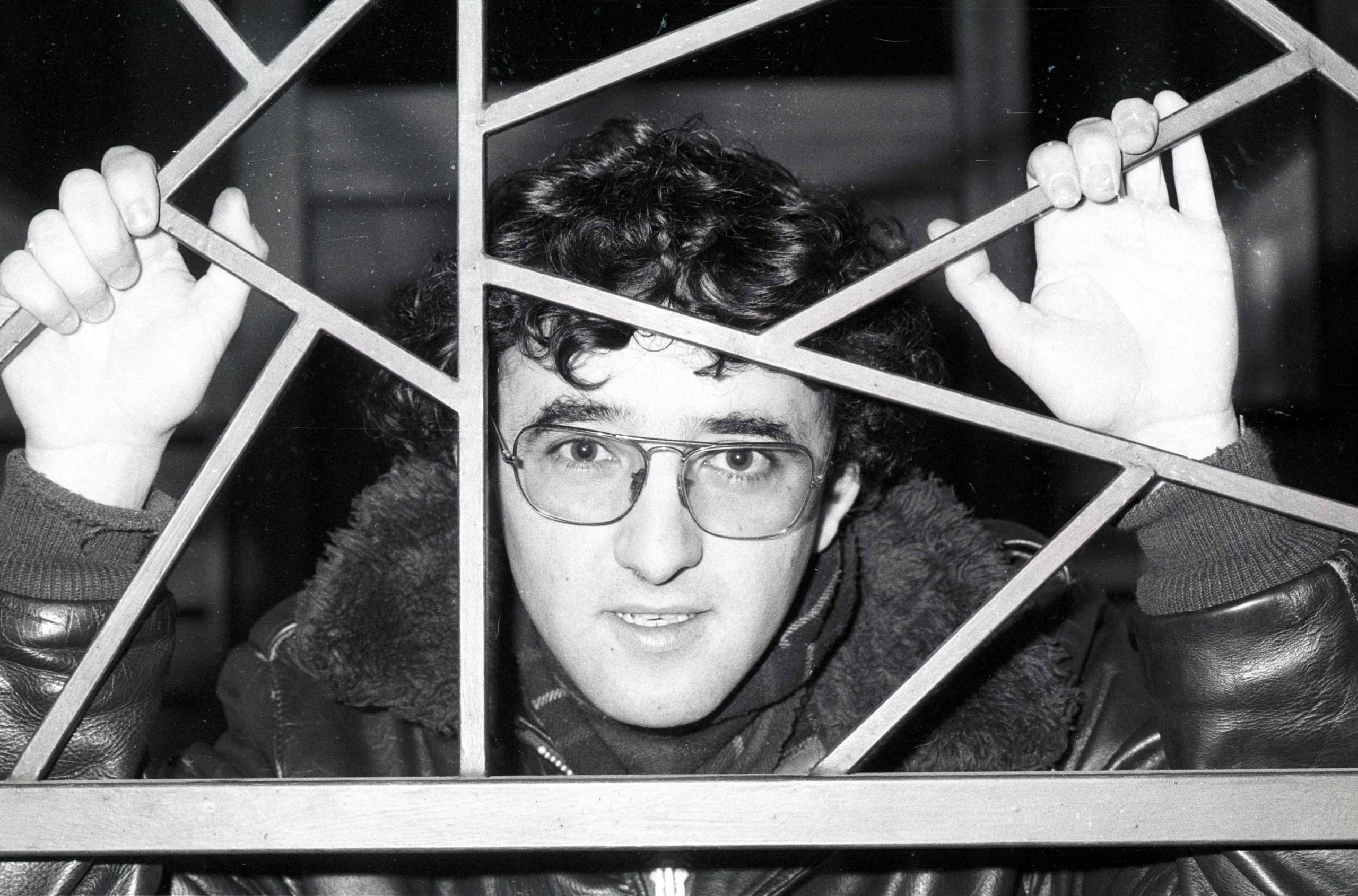 THE FACTS ARE IRREFUTABLE. THE EXAMPLE SET by Chilean writer Roberto Bolaño represents one of the most prodigious sprints in the history of literature. He saw himself as a poet, but he started writing prose in 1990, aged 37. Married to the Spanish Carolina López, who had already given birth to the first of their two sons, Lautaro, he was obsessed with securing a stable economic future for his family. He published his first novel on his own, without success, when he was 44. At the same age, he wrote in his diary that he was sure he would die unpublished. He was wrong. Just two years later, in ’98, he left behind a rumour in writers’ circles that he could start to live off his literature thanks to Los detectives salvajes. The novel, a suicide, according to him, immediately won him two important prizes. One was the Herralde de Novela, founded by Jorge Herralde, his editor and friend -with Bolaño this strange equation was possible; and the other the Rómulo Gallegos, the equivalent of a Latin American Nobel.

What happened next looks like the end of the story, but in fact it was only the beginning. In July 2003, the Chilean writer died from a liver infection -he had known about it since 1992- while lying in a coma waiting for a liver transplant at the Vall D’Hebrón Hospital in Barcelona. Bolaño was 50 years old, at the height of his career, and he had lined up around 30 contracts for publishing part of his works in countries such as Italy, France, the Netherlands and the United Kingdom. At the time of his death he was, at the very least, the most important Latin American writer of his generation according to the critics. But he still had one last and generous surprise. In 2004, just a year after his death, publishers Anagrama produced a single volume of his work. Bolaño had wanted it to be released as a five book saga, with the aim of obtaining a bigger financial return for his family after his death. This monumental posthumous work, 2666, was written totally under the threatening shadow of “the hot whore”, as he liked to refer to death, using the words of his favourite poet, Nicanor Parra.

These are the irrefutable facts. But with 2666 began the legend of Roberto Bolaño. That legend started within the literary scene of the Spanish language, where echoes were still re-sounding from Los detectives salvajes and Nocturno de Chile (By Night in Chile), a book he was intent on calling Tormentas de mierda (Storms of Shit). Susan Sontag said of this book that it was “destined to have a permanent place in world literature”. From then on, his work began to make a gradual incursion into the United States and in the Anglo-Saxon literary scene, where the aura of Bolaño the cursed writer has been fed persistently in the media with the addition of some false stories. The worst of these was that the consumption of heroin had been the cause of his illness. This was based on details that had been dug out of another story of Bolaño’s called La playa, and represent claims which have been repeatedly denied by friends and companions of the writer throughout his life.

What is certain is that in barely 10 years Bolaño has gone from being a marginal poet who spent three quarters of his existence in the drains of literature and life to being the most popular and most translated Latin American writer since Gabriel García Márquez. The new Kerouac. The new god creator of universal literature. The new wine. For Spanish writer Javier Cercas, who as a sort of homage presented the Chilean as a character in his novel Soldados de Salamina, there is no explanation for the amazing literary progression of Bolaño. “That he should have written what he wrote between 1996 and 2003 enters directly in the field of being astonishing.”

According to Jorge Luis Borges, one of the main teachers of the Chilean writer, “art is the imminence of a revelation that doesn’t occur.” That was Bolaño, who will have been dead nine years last July. And such is the literature of Roberto Bolaño.

The Chilean entered the Great Literary Game like Achilles in Troy. His horse was called Los detectives salvajes, an apparently inoffensive novel that arrived in the bookshops destroying everything. It violently twisted the neck of each of the swans of boom and wiped from the map, without pity, all its literary heirs. The critics didn’t take long in comparing the book, for its formal originality, with Rayuela, by Julio Cortázar. But the Chilean writer defended himself from eulogies with the same deftness as he used to free himself from the critics. “Mine is a poor novel compared with Rayuela. There’s only one thing that I can accept, that at least I tried my hand at new structures and games. Whether I have succeeded or not, that I don’t know.”

For Bolaño, writing didn’t come naturally and neither was it a pleasure. It was a battle that had already been lost that he found necessary to take on “with common sense and lucidity”. That’s why he told the young writers who went enthusiastically to see him on what turned out to be his last public appearance, in Seville, the month before his death, that he didn’t recommend them to write, but to “live and be happy”. In the same way, when he finished writing Los detectives salvajes he promised his friend, Spanish literay critic Ignacio Echeverría, that he would not involve himself again in such a substantial project. “I got as far as being tempted to destroy it. I saw it as a monster that was devouring me.” Echeverría said later that 2666 was “the novel that Borges would have accepted writing.” Nevertheless, in the last years of Bolaño’s life, as his cirrhosis became ever more obvious and dangerous, he launched himself once more into the abyss of an immense novel. But this time he did it without a parachute, possessed by an obsession and ambition out of all proportion. Finishing 2666 was to become his second illness.

And what’s the novel about, Roberto? Journalists asked him insistently in those last years. The Chilean, tranquilly, replied: “It’s a very long novel, a monstrous work. It’s such a beast that it could do away with my health, which is already pretty delicate. Perhaps it will be an awful novel. Perhaps not. Partly, it will be science fiction. It’s a detective story, with the additional problem being that it’s excessively long”. The first person to read 2666 was Jorge Herralde. He devoured the book’s 1,000 plus pages in one go, isolated on an island, and remained amazed for always: “I think that 2666 belongs to the same club as The Trial and The Castle by Kafka, or Proust’s In search of lost time. A club of unfinished immortal novels.”

Words like dedication, posterity and success were of little importance to Bolaño. When in 1999 the journalist Daniel Villalobos asked him if it was important to him to be recognized in his own country, Bolaño replied vehemently: “The most important narrator of this century that’s just finishing was called Franz Kafka and they didn’t recognize him in his home. So you can go figure whether a stupidity of that  aliber is going to bother me.” Bolaño was born in Santiago, Chile, but he didn’t see himself as a Chilean. He saw himself as Latin American, and a foreigner wherever he went. “Your motherlands can be many, but there is only one passport -and that’s the quality of writing.” His opinions about the trade of writing were also romantic and extreme. He believed, for example, that “without danger, literature is nothing.” And that to be an authentic writer it is necessary “to write as if one were going to die the next day.”

“If I have to live anyway / without a rudder, in delirium”. Bolaño liked to recall these verses by his best friend, the Mexican poet Mario Santiago, to defend the life style of the true artist. In his literary Trojan horse, Los detectives salvajes, which was published the same year as Santiago died, Bolaño transformed his great friend into Ulises Lima, just as he himself became Arturo Belano, a character through whom one can get a feeling in Los detectives salvajes that many parts are his biography. Especially those that refer to the period in which he and Mario Santiago founded, in the mid 1970s, infrarealism, an innocent yet honest Mexican poetry movement. Their first proclamation was called Dejenlo todo, nuevamente (Leave it all, again)- the aim of which was to oppose the status quo of the country’s poetry. At that time Bolaño read almost everything. By the end of his life he was capable of wandering through the history of literature with the same naturalness as he walked through the costume jewellery shop where he worked for a while in the town of Blanes near Barcelona. It was in the shop that he said he saw the most beautiful woman in the world. Bolaño arrived in Catalonia in 1977, never to leave. A salesman in his mother’s shop was only one of the many jobs he had to do in Spain to survive. He also worked as a grape picker, a waiter, a dishwasher, a receptionist, a stevedore and, his favourite, as security guard at a campsite in Casteldefells.

Bolaño could cope with it all, except with his two chronic illnesses. On the one hand his fear, and on the other his obsession to finish writing 2666, made the writer keep postponing the procedures for having a liver transplant for several years. Nevertheless, a month before his final admission to hospital, as his liver problem was getting worse and he rose to number three on the waiting list, he was obliged to postpone the end of his novel. He didn’t know it at the time, but the postponement of a finale that dragged along behind like a cross, was to be for ever. “Now I’m going to try and work more calmly. I will do the corrections alone after the operation,” he told a Chilean newspaper in mid June.

The day the killing of Roberto Bolaño took place; the scene of the crime was filled with women and men. They were the thousands of characters of 2666 gathering around his bed. None of them pulled the trigger at 2.30 in the morning of 14 July in Barcelona, but they were certainly accomplices. What happened, however, could never be proved, because there were no witnesses remaining of the literary homicide.

The poet Nicanor Parra was right. We all owe a liver to Bolaño.