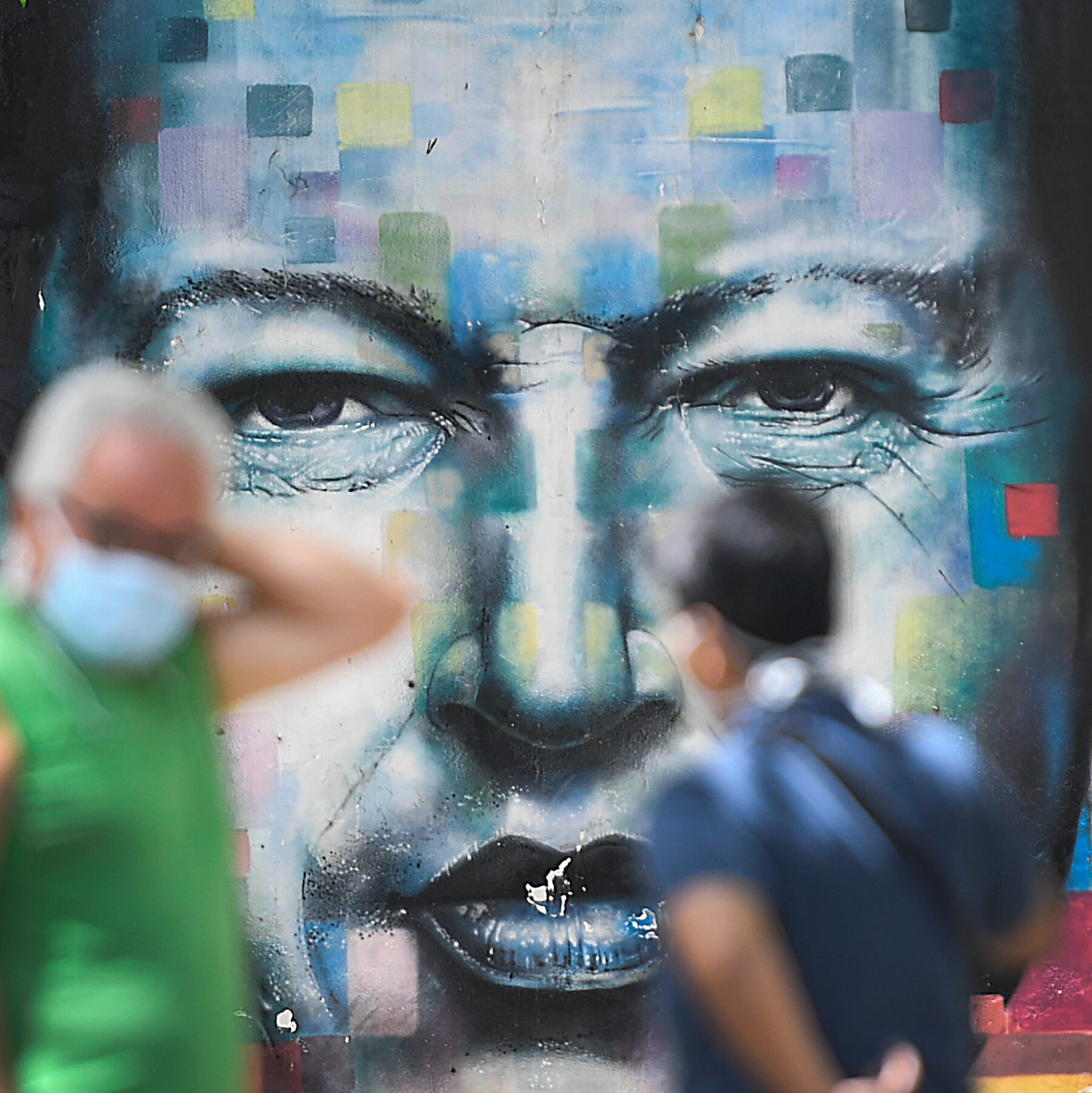 PRESIDENT HUGO CHÁVEZ, ELECTED THREE TIMES in free and secret ballots by the Venezuelan people, is more than a charismatic politician. He has become characterized as the maximum expression of what is Venezuelan. The typical Venezuelan is conservative, loves music, sings or would like to sing, is transparent in his words and his expressions, is a “story-teller”, a believer but not really religious, sure of himself, a nationalist, heroic and Utopian, a dreamer, a worker, big-hearted, but above all, very sensitive, passionate and always wanting to be the centre of attention.

President Hugo Chávez represents without doubt, both among his sympathizers and those who are not, a break with the form and the basis of doing politics in Venezuela. A man who sings, plays baseball and is a hard worker makes an attractive profile for one who today holds in his hands the responsibility of  not only directing the destiny of a country but also has set himself up as the conductor of a political project: “Bolivarian socialism”.

However, one section of the country criticizes and questions him for precisely the same reasons as the working classes view him with empathy. He has been labelled a mad man, a gorilla, a squaddie, a dictator, an authoritarian and a “child devourer”, in allusion to how the Communists were characterized at the height of the Cold War. Reasons come and reasons go, but what we can be sure about is that, not just in Venezuela but in the world as a whole, Hugo Chávez has burst  onto the scene with a fiery discourse that has made him the voice of those that didn’t have a voice. He has raised the flag of anti-imperialism and proclaimed that a different world is possible, of humanism against capitalism and of the poor as the basis of building the future, reviving the class war within the framework of globalization.

In Venezuela, Chávez has used a series of enabling laws from 2002 to begin a process of appropriation of economic interests subordinate to the principles established in the Constitution, the offspring of a process that he himself pushed for in 1999. As a result of this, it brought on the coup d’etat carried out by sectors of the Armed Forces and business allied with media channels that saw their class interests under threat. However, the coup was overturned by the people themselves in less than 48 hours.

Democratizing access to land and its redistribution, stimulating the communal productive effort and the spread of social politics to promote welfare through commissions, both for health and education, opening up the way for people to learn to read and write, reducing illiteracy to zero according to UNESCO, as well as democratizing free and mass entry to a university education were just the first achievements.

Following on from this has come a deepening of participative democracy through the organization of People Power, as expressed in the communal councils and the communes, alternate forms of organization by the people themselves that bring together all the expressions of the organization of civil society. They cover not only the demands of the state in local matters, but also the possibility of the citizens finding solutions through the transfer of resources. The result is the stimulation of the organization and the execution of socio-productive units capable of diversifying the concept of ownership, creating space for the growth of social and community property.

More recently, the government of Hugo Chávez has entered a new phase, a deepening of Bolivarian socialism. This has involved the organization of new Grandes Misiones (High Commissions) that seek to deal with other sensitive areas among the population that have yet to be looked at. These include: access to a decent home, claims for the rights of senior citizens, and teenage pregnancies, as well as taking up once more fast track procedures for reforming labour legislation as a means of re-establishing the retrospective nature of social benefits, a right lost during the mandate of the last president of what is known as the Fourth Republic, Rafael Caldera.

Today, Chávez is suffering from cancer, which for his supporters (more than 60% of the country according to the latest polls) and the Venezuelan people in general, creates a level of uncertainty about his capacity to continue with the revolutionary process in the country. He, himself, has criticized the dependency on his leadership, and the need to guarantee continuity in any future scenario has started to awaken a new stage of “Chavism”, one that reflects on its future either in the hands of its leader or without him. An opposition that is sunk in its incapacity to connect with the realities of the people is no longer the problem. It has been Niccolo Machiavelli’s “goddess of fortune” who has forced a change in Chavism.

Meanwhile, with a gap ranging from 28 to 33.1% between Chávez and his nearest rival for the elections on 7 October this year, as sounded out by five different Venezuelan polling  organisations, there is no doubt that he will be the revolutionary candidate. And that the medium and long term future of Bolivarian socialism will depend on the maturity of the people and their resistance to any foreign interference in the destiny of a people that decided to declare their independence yet again.

OPIUM FOR THE PEOPLE by Max Römer Pieretti

WRITING ABOUT CHÁVEZ HAS BEEN THE JOB OF JOURNALISTS for two decades, ever since  he rose against democracy in 1992. Then, he excused himself for the use of arms that Army officers like him had to wield against the people in February 1989. Since then his apparent moral handling of the Venezuelan situation, assuming responsibility for the failure of his coup attempt, has flowed into rivers of ink either praising or abusing him.

Chávez won the approval of the people, and of the press, in saying on a national channel, while perfectly dressed in his parachutist uniform, that he took responsibility for the failed coup d’etat. His text “right then” turned him into an expression of fashion, a bastion of morality, of ethical standards. Once he had been made a  prisoner, he became a champion of  justice, an heroic character, as if he had stepped straight out of a Valiant Prince comic, epitomising the libertarian anguish of the dreadful aegis of democracy and its enthusiasm for  alternating governments.

No sooner than the then president Rafael Caldera pardoned him, Chavez was up on the platform of a truck making speeches all over Venezuela, meeting up with his mentor, Fidel Castro, and planning his moment for taking political power. On being sworn in as president he branded the constitution as moribund and… the good began.

The new constitution was called La Bicha (The Bug), and its text was used to support the adoption of measures that have perplexed many of those who believed in him. For those who didn’t believe in him it underlined his image of an autocrat. He closed down and expropriated businesses, sacked people at the drop of a hat; in short he committed an enormous list of etceteras that he has used to win the support of a people hungry for measures. Content with the firework displays and a bit of bread, they look at their ring master  who behind the curtains goes about seeing that his acolytes do what they want and take from the treasure trove that the country’s oil leaves in the coffers each day.

The Venezuelan debt is so big that the mortgage will have to be supported by several generations to come. So that people don’t take too much notice of this piece of nonsense, he keeps the people in poverty with populist programmes that he has given the military name of “missions”. There are more than 30 of these missions. They range from the sphere  of education to health. And while they have brought welfare to the part of the population that receives it, he has left to one side those who, not being his followers, deserve equal  treatment. There are also complications for the future. Instead of strengthening public institutions, setting up state platforms solid enough for his management not to be forgotten in years to come, he has occupied himself in turning the spotlights on the public administration so that it is he, as the standard bearer of the truth, who delivers to the people, his people, all sorts of gifts, while in the shadows those opposed to him live a very different reality: of oppression and persecution.

The government of the lieutenant colonel has been by television. He started out in candid fashion, and he has enjoyed himself so much in being swamped with adulation that he now spends hours each day making believe that he is giving orders. His ministers, his cabinet, and all those who aspire to be close to the commander and to be anointed with his love, have to sit down and applaud happily all the witticisms and songs that their president reels out that day. Enamoured to have a president who cares for them, who spoils them from his soldier’s heart, who lavishes his affections on them in return for their loyalty- translated into dressing up as rojo-rojito, (literally Red, little Red – Chavez supporters) – the people follow his witticisms as if he were a television show animator.

He has replaced doctors, sports coaches and personal guards trained in Venezuela with Cubans. He has allowed the hands of the brothers Castro to besmirch the patriotic honour of which he has talked so much in favour of that ’empire’ that penetrates all the entrails,  and has danced with the Cuban communists to the rhythm that they have set. It has reached the point that now he is a sick man he is being treated on the Caribbean island because he fears that in Venezuela he will be badly treated by some doctor who has not taken him to his heart.

Chávez is yet another of the baddies of the film. His allies in power have been falling, little by little, but some of them have fortified themselves in cruelty. Lukashenko, Al-Assad, Fidel and Raúl Castro, Ahmadineyad, Gadafi, Mugabe and Hussein have formed part of this squadron of super buddies of Chávez, people without scruples, capable of going against their own people to preserve their power, just as Chávez himself has done in the many demonstrations that his government has faced and has been able to control through armed force in the streets, and as he was ordered to do in 1989 against the people.

A little fish that bites its own tail; that is how the government of Chávez has been and still is. On one hand he has lit up the shadows for a people who have been oppressed through history, lights that are sometimes confused with education and health. On the other hand, shadows remain when he keeps the people under curfew each day, maintaining life in the body as far as is possible. For life in the land of Chávez is only worth  the cost of a bullet.