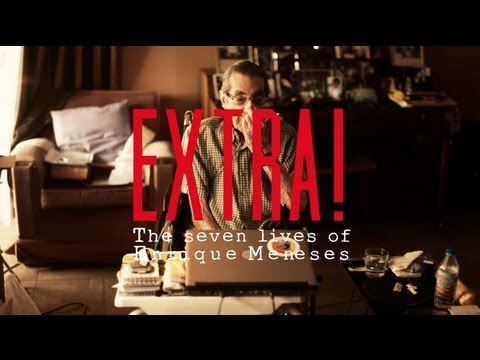 The seven lives of Enrique Meneses.


THE OXYGEN TANK AND THE WHEELCHAIR he moves around in tell you that he’s not in the best of health. He opens the door of his home to us (in reality, he says, it’s always open) in one of the respites that he gets from his fragile state and his constant visits to the hospital. In his work area, halfway between the chaotic library of a Conquistador in his 80s and the sanctuary of a hunter, family souvenirs mix on the top of an old Yamaha piano with some of the photos that have made him one of the exceptional witnesses of the 20th century. Alongside smiling portraits of the family there’s Meneses with Fidel Castro, Che and Gabal Abdel Nasser. Just a selection of the hundreds of live characters from the past century that his lens has immortalized. Enrique Meneses, one of the last old rockers of Spanish reporting, has never liked portraits or posed shots. “Yes, in many ways photography is like a hunt. I don’t like it when they put on a smile for the camera.” The only Spanish journalist who was a witness to the March on Washington and the famous “I Have a Dream” speech of Martin Luther King, he was the first photographer to cover the Cuban revolution, a correspondent for more than seven years in the Middle East… Enrique Meneses is, above all else, a chronicler of an era; he was born in the right place and in the right century. “I was privileged, but I lived through a very hard war, the World War in Paris, when I was 10 years old. I was brought up with German tanks. I went to school at eight o’clock in the morning with a gas mask hanging from my shoulders because we didn’t know if they were going to bombard us with gases. We, as lads in Paris, as we had no money, picked up the little that remained of cigarette butts, mixed it with dried thistles, washed it and with a machine made cigarettes that we sold to journalists. My father set up a press agency in Berlin with the news room in our house. My mother told me to go out in the street because there were journalists working in the house. I feel I was a bit lucky because that moulded my mind. My mother used to say to me: “Get your brothers dressed; we’re going to the shelter. And when she came back I’d taken no notice because we lived on the third floor of the house and above us were another three floors. If a bomb fell we would have had three floors of debris, and if we had gone to the cellar six would have fallen on us. Perhaps it’s that rationalist mentality -“learnt from the French”- that sharpened his senses in his journeys around the five continents. His adventurous spirit, “a mix of ink and a little whisky” as he always says, has led him to travel around much of the world telling stories and, now in the rearguard, to become an iron defender of street journalism, of improvised writing, he who knows neither timetables nor chiefs. “Journalism is going, listening, seeing, returning and telling, as simple as that.  University helps one to become a doctor, an engineer, an architect…but journalism is something else. The man who went to Marathon, to see the battle between the Persians and the Athenians, saw that the latter were winning and ran back to Athens to tell them:  ‘Calm down, we?ve won the  battle’. What did he do? He had gone to Marathon, he saw and listened, returned 40 kilometres running and told it. And then he died. The perfect war reporter, because on top of that he came from one?…” Like Philippides, Meneses has been and come back many times to tell his story. He hates being seen as a “collector” of conflicts, with the same vehemence that he despises wars. “I have never gone looking for them… My last one was in Bosnia with Alfonso Armada, Gervasio Sánchez… and it was tough. A city without electricity, surrounded, snipers if you crossed an avenue?I didn’t run; I crossed it walking. I said they wouldn’t kill me because they’d think I was the village idiot. Many students ask on their masters courses about fear. In a gun battle I like to listen to the bullets because it means that they are not headed for me: you? don’t feel the one that kills you…Fear doesn’t alert, it paralyzes”. On one occasion he refused to do an interview because a journalist started by asking him how many wars he had been in. “I don’t count them, just like I’ve never counted how many chicks I’ve slept with,” he replies angrily.

The reporter from Madrid is about to reach his 83rd birthday. Ever since he was 17 (when he covered the death of Manolete), he has not given up the job. As he admits, there has not been a day when he has not written or worked on some topic that gets him excited. He’s a tusitala, a teller of stories, as the aborigines called Robert Louis Stevenson. “Vocation is a way of life; I live and survive, as did Kapuscinski. Nobody will do a good job if they don’t have the vocation for it, just as the best cook is the one who from when he’s little dreams of making dishes”. For the “tribe”, as the  veteran journalist Manu Leguineche baptized many of the Spanish war reporters of his time, Enrique will always be a benchmark, a “thoroughbred” as the photo-journalist Gervasio Sánchez called him. Like many of them, it was his desire to show reality just as it was which pushed him into the trenches of the news. “The first thing I did was to learn to take photographs, without any schooling. I picked up a camera and took photographs, watched how others did it around me and that’s how I learnt. You have to get the most out of a subject that you’ve chosen to do. I spent four months in the Sierra Maestra with Castro: two battles – the one at Estrada Palma and at Pino del Agua. I spent time in jail, and the secret police spent eight days beating me, until in the end they threw me out of the country…  But they are just occupational risks. When I got to Paris they had published my reports and sold CBS a film from the Sierra Maestra for $ 50,000. I used to say photography is easier because it doesn’t need a translation. I would have been an imbecile if I had written a text of four pages…who would you sell that to?” Once again, French  rationalism.

A man soaked in the 20th century, embracing the following one with the naturalness of an adolescent, should come as a surprise, but not with Meneses. Stuck to his iPhone and his computer (decorated with a sticker of Fundación Mozilla), for more than seven years now he has been frequently feeding his blog. Disillusioned with his wanderings in the digital media, he started off with an online journal. There, where he talks about history and geopolitics, he analyzes current events and exorcizes his demons. He can just as easily tell of his experiences in the Middle East (“I went there because the carry-on hasn?t stopped since they killed Christ”), as anecdotes about Dylan or Paul Newman, or his latest visit to hospital. “The first thing Internet did was to turn you into everything. You are a printer, a photo mechanic… You can write texts, set up photos, your videos… The only thing you cannot do is journalism sat in front of a computer and waiting for the news to reach you via Google. That is absurd, because somebody has to be getting that information on the ground”. It is this Journalism 0.0 – as he calls it -, that makes him, for the first time, recall an anecdote with sadness.  “My daughter was in the first war in Iraq. The first day the bombardment began she was in the Hotel Palestine interviewing, and in the bar the Spanish special correspondents were joking around and drinking beers, talking about women and football. That is not journalism.  The tourists who go on a safari in Kenya are given cards with the names of the animals that are there, and when they see them they tick them off. That’s for idiots. If you want to go on a real safari, you go alone. It’s the same as if you go to war only to say that you’ve been there, like the collectors.”

His expression changes when the word crisis crops up. Of values, of the financial system, of the media… It doesn’t seem to surprise him very much… he who was born three days before Black Thursday on Wall Street. He has survived many.  “There are two revolutions at the moment: one is the financial crisis, and the other is technical, technological. Since the year ’68, when news packages started to circulate from one computer to another, mankind has changed era. What we are living is an economic crisis that of course affects all the media. But, more than that, the technological crisis is affecting those very same media. What I mean is… there will never again be an editorial team of 200 or 300 journalists. It’s absurd. It’s what I call  Fordism”.  Are we seeing, therefore, the end of the traditional media? Meneses thinks that the voice of the journalist will continue to be indispensable and that, increasingly they will tend to be freelances. “I have been 63 years in this profession as a freelance, and now you are all going to be freelances. Of course, it’s going to take you by surprise because you are accustomed to getting paid on the last day of the month, to get paid extra for how long you’ve been there, to have a table with a computer and go to work every day at such hour, to work from nine until 6 in the evening.” As the word ‘rest’ doesn’t exist in his vocabulary, he is now involved in several projects. From a television channel on Internet, Utopía TV – et up by a team that works together in a charitable way, to a foundation with which he wants to help new photographers make the leap with their first big report.

This adventurer, who ended up travelling from Cairo to Cape Town through colonial Africa following a Nuer beauty who his travelling companion had fallen in love with; who hid the photographs that would make him internationally famous in the petticoat of a young Cuban, and who shows more admiration for his professional companions than he does for Dalí, Hitchcock or Picasso, all round journalist Enrique Meneses has still not called an end to his adventures. We end up talking about the recent civil war in Syria, about Wikileaks (“forget about ethics, if journalism has to work with them we are in a bad way”) and the independence of Catalonia. And, once again, about the future of this profession. We say our farewells saying that we don’t have so much to moan about, that at the end of the day the “hot” parts of the planet have never seen journalists on the dole. When a survivor says this, it would be difficult not to believe him. We leave his Kiplingesque lair thinking that, looking at things clearly, neither the wheelchair nor the cylinder give an exact image of the life that remains for the Maestro Meneses. He hates it when he is called that, but we all keep doing it for obvious reasons.